The brain is a collection of about 10 billion interconnected neurons. Each neuron is a cell that uses biochemical reactions to receive, process and transmit information.

A neuron’s dendritic tree is connected to a thousand neighboring neurons. When one of those neurons fire, a positive or negative charge is received by one of the dendrites. The strengths of all the received charges are added together through the processes of spatial and temporal summation. Spatial summation occurs when several weak signals are converted into a single large one, while temporal summation converts a rapid series of weak pulses from one source into one large signal. The aggregate input is then passed to the soma (cell body).

It is believed that the nanometer sized particles in colloidal gold effect the electrical charges that are produced when those neurons fire in effect enhancing the normal communication that takes place between the nerve cells. This enhancement is believed to be responsible for increased brain functions and mental acuity that are reported by users of colloidal gold.

Every sport can be improved by better coordination and motor function. If you are serious about your sports performance you will want to experience firsthand the improved abilities you will get from using Mesogold. Your friends, team players and competitors will notice your improved playing, but only you will know why you are playing better. 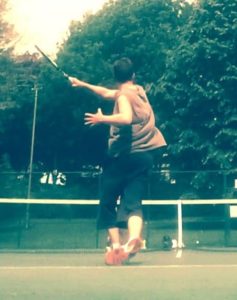 James Cooper is the Director of the Simple Truths Foundation, follow his journey back into the world of tennis/fitness/performance with colloidal gold (and other elixirs) at his new blog Tennis Yoga Chi Kung.